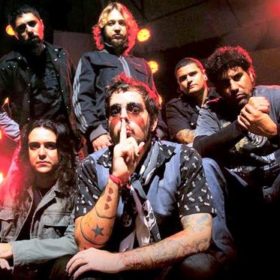 Detonautas Roque Clube is a Brazilian rock band from Rio de Janeiro. Usually the lyrics of their songs relate to violence, political corruption and love. The history of Detonautas is mixed with the onset of the fever of Internet in Brazil. In 1997,... Read more

Detonautas Roque Clube is a Brazilian rock band from Rio de Janeiro. Usually the lyrics of their songs relate to violence, political corruption and love.

The history of Detonautas is mixed with the onset of the fever of Internet in Brazil. In 1997, Tico Santa Cruz appeared in a chatroom asking if anyone had played any instrument, then, Eduardo Simão, who also went to the room, answered and became known by his nickname in chatrooms: Tchello. The singer Tico lived in Copacabana, Rio de Janeiro and Eduardo had a guesthouse in Ilhéus, Bahia.

After the meeting of the two precursors in Rio de Janeiro, the band went through several configurations, until more members were recruited through the Internet. The fact of how the band was formed reflected in its name: Detonadores + Internautas = Detonautas.

Thanks mainly to the insistence of Tico Santa Cruz and the providential help of his friend, Gabriel, O Pensador, Detonautas were getting their first hit and after ripening on the road, mixing performances in places of good structure (the band has reached opening for Red Hot Chili Peppers to 50,000 people in Pacaembu) and others less so, but that served to give a chance and experience. After much struggle, including the famous pilgrimage to the demo under his arm, finally a chance: after much back and forth Warner Music Brazil signed the band, remixed and released the album, packed with the singles “Outro Lugar” and “Quando O Sol Se For” was a great national success.

The Detonautas are well known by viewers of MTV Rockgol, the championship of musicians. Were considered good players, with a 3rd place in 2003 (which Tico was the top scorer). Presenters Paulo Bonfa and Marco Bianchi dubbed almost all players, as Koala (Tico), Chainsaw (Tchello), Mane (Renato Rocha), Brasil-sil-sil (Fábio Brasil), The Grandson of Rodrigo (Rodrigo Netto), and the famous DJ “Clééééston”, considered veteran by the two biggest ace of the championship.

In 2004, the band released their second album, Roque Marciano, who won the first gold of Detonautas. The album contains the hits “O Dia Que Não Terminou”, “O Amanhã”, “Tênis Roque”, “Só Por Hoje”, among others. On November 6 of that year, Detonautas recorded their first DVD, titled with the name of the second album (Roque Marciano) which was released on the following year.

In 2005, the band got in the studio to record their third album: Psicodeliamorsexo&distorção, marked by a heavier sound and a strong presence of voice. The album came packaged with songs like “Não Reclame Mais”, “Dia Comum” and “Você Me Faz Tão Bem” considered by many the best success of the group. For the recording of the video, the band was inspired by the movement Free Hugs, made in Australia.